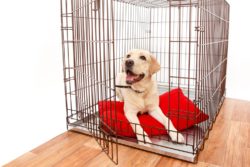 A Crate Training Schedule for Your Dog- The Benefits and Uses

Crate training may take some time and effort but can be useful in a variety of situations. If you have a new dog or puppy, you can use the crate to limit access to the house until he learns all the house rules, such as what he can and can’t chew and where he can and can’t eliminate. A crate is also a safe way of transporting your dog in the car, as well as a way of taking him places where he may not be welcome to run freely. If you properly train your dog to use the crate, he will think of it as his safe place and will be happy to spend time there when needed.

Crates may be plastic (often called “flight kennels”) or collapsible, metal pens. Collapsible fabric kennels are designed for use when the owner is present and may not contain a dog for long periods while unsupervised. Crates come in different sizes and can be purchased at most pet supply stores. Your dog’s crate should be large enough for him to stand up and turn around in.

Crate training takes days or weeks, depending on your dog’s age, temperament and past experiences. It’s important to keep two things in mind while crate training; one, the crate should always be associated with something pleasant; and two, training should take place in a series of small steps- don’t go too fast.

Step 1: Introducing Your Dog to the Crate

Step 2: Conditioning Your Dog to the Crate for Longer Time Periods

Part A- Crating Your Dog When Left Alone

After your dog is spending about 30 minutes in the crate without becoming anxious or afraid, you can begin leaving him crated for short periods when you leave the house. Put him in the crate using your regular command and a treat. You might also want to leave him with a few safe toys in the crate (see our handout, “Dog Toys and How to Use Them”). You’ll want to vary at what point in your “getting ready to leave” routine you put your dog in the crate. Although he shouldn’t be crated for a long time before you leave, you can crate him anywhere from five to 20 minutes prior to leaving.

Don’t make your departures emotional and prolonged, but matter-of-fact. Praise your dog briefly, give him a treat for entering the crate and then leave quietly. When you return home, don’t reward your dog for excited behavior by responding to him in an excited, enthusiastic way. Keep arrivals low key. Continue to crate your dog for short periods from time to time when you are home so he doesn’t associate crating with being left alone.

Part B- Crating Your Dog at Night

Put your dog in the crate using your regular command and a treat. Initially, it may be a good idea to put the crate in your bedroom or nearby in a hallway, especially if you have a puppy. Puppies often need to go outside to eliminate during the night, and you’ll want to be able to hear your puppy when he whines to be let outside. Older dogs, too, should initially be kept nearby so that crating doesn’t become associated with social isolation. Once your dog is sleeping comfortably through the night with his crate near you, you can begin to gradually move it to the location you prefer. Puppies that are healthy can have their water taken from them a few hours before bedtime to help decrease the frequency of potty trips they need to make during the night.

Too Much Time in the Crate

A crate isn’t a magical solution. If not used correctly, a dog can feel trapped and frustrated. For example, if your dog is crated all day while you’re at work and then crated again all night, he’s spending too much time in too small a space. Other arrangements should be made to accommodate his physical and emotional needs. Also, remember that puppies under 6 months of age shouldn’t stay in a crate for more than three or four hours at a time. They can’t control their bladders and bowels for longer periods.

If your dog whines or cries while in the crate at night, it may be difficult to decide whether he’s whining to be let out of the crate, or whether he needs to be let outside to eliminate. If you followed the training procedures outlined above, your dog hasn’t been rewarded for whining in the past by being released from his crate. Try to ignore the whining. If your dog is just testing you, he’ll probably stop whining soon. Yelling at him or pounding on the crate will only make things worse. If the whining continues after you’ve ignored him for several minutes, use the phrase he associates with going outside to eliminate. If he responds and becomes excited, take him outside. This should be a trip with a purpose, not play time. If you’re convinced that your dog doesn’t need to eliminate, the best response is to ignore him until he stops whining. Do not give in, otherwise you’ll teach your dog to whine loud and long to get what he wants. If you’ve progressed gradually through the training steps and haven’t done too much too fast, you will be less likely to encounter this problem. If the problem becomes unmanageable, you may need to start the crate training process over again.

Attempting to use the crate as a remedy for separation anxiety will not solve the problem. A crate may prevent your dog from being destructive, but he may injure himself in an attempt to escape from the crate. Separation anxiety problems can only be resolved with counter-conditioning and desensitization procedures.